Families partner with Habitat for Humanity in the U.S. and around the world to build better lives for themselves and their children. Learn more about the types of work we do — from home construction to innovation — to build a world where everyone has a decent place to live. Become a Volunteer!

Affordable Housing, or lack thereof, has been a discussion topic in the media, advocacy groups, and the political arena for years, and lately the chatter has become louder and more urgent. How bad is it? According to the leader of The National Low Income Housing Coalition “It’s not a housing crisis. It’s a housing catastrophe. The impact that a lack of affordable housing in rental properties and individual home purchases has on individuals, families, and the real estate industry is devastating nationwide. A lack of affordable housing due to COVID and the ability to work from home, low interest rates has led to massive migration on a national level to the country, to the suburbs and the rural areas.”  See more at https://nlihc.org/ 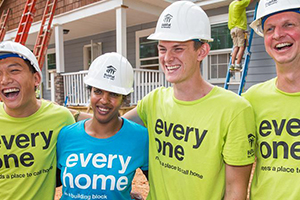 What Happened in Vermont?

VT Digger reported that realtors were selling homes in Vermont — sight-unseen, and above asking price — to clients from New York, Massachusetts, Connecticut, Florida, and even from out West. The last time something similar occurred was after the September 11 attacks in 2001. This more recent sudden influx due to COVID-19 gives us a preview into how population increases due to climate migration may impact Vermont’s culture, natural resources, and communities — and into the tangible ways we can begin preparing.
For instance, Vermont already has a housing problem, caused in part by supply, somewhat by second homeownership (of which the state has the second highest rate in the nation, after Maine), and in part by the condition of the existing housing stock. Add to this an increase in demand for land from what is expected to be a largely affluent first wave of newcomers, and an existing limited housing stock, and we can imagine an exacerbation of Vermont’s affordable housing crunch for people who already live here.
In addition to building more — and more affordable — housing, Vermont would need to make deliberate investments in infrastructure like sewer and water in villages to comfortably accommodate growing populations. “Vermont has strong policies that promote smart growth, as well as a shared appreciation for our downtowns and villages, but continued and increased investment is really necessary to make sure that these areas have the housing and services, like high-speed internet, to attract newcomers — not to mention to support its primary residents.”
Solutions Offered by Housing Developers include:
Habitat for Humanity

Recent Update:  “When we were forced to shut down the Greenes’ house on Peggy’s Way in Manchester, the construction manager worked on it by himself until we could open up enough for the others to come in and help. The Greenes moved into their new house in the middle of August, and the house will be dedicated on September 20th. The crew is now working on the house at 320 North Branch Street in Bennington, which should be finished by the end of the year, at which time we will concentrate on the house at 44 Peggy’s Way in the Jennifer Lane Neighborhood of Manchester Center.  We look forward to getting back to our more traditional Habitat model with volunteers coming to build, but in the interim we have to scale back the number of houses we can build. We will continue our home repair ministry.”
THE SHIRES VOLUNTEER SCHEDULE IS AVAILABLE THIS MONTH AS AN ATTACHMENT. Download the schedule sheet here.